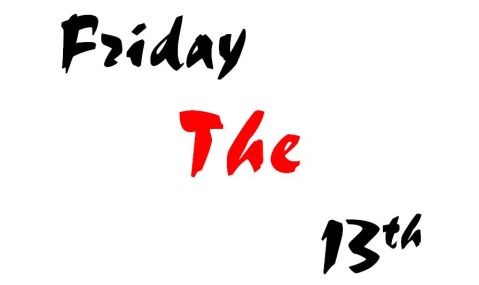 Did you know that the most times Friday the 13th can happen in a year is three? Well, this year will have all three of them, the first being today and the next two on April and July. I also heard that they happen to be 13 weeks apart. I counted, and they are indeed. The only way this could be even more interesting is if the year was 2013 instead of 2012.

There are two terms for those who are fearful of today, they are friggatriskaidekaphobia and paraskevidekatriaphobia. Whoever is responsible for starting this fear is probably laughing out loud in their grave somewhere. This person might possibly be Thomas W. Lawson, who wrote a book a hundred years ago, Friday, the Thirteenth, which is about crashing the stock market on the day of the week and number considered to be unlucky. Whatever the case may be, it’s funny how some things can catch fire and lead to such a large “following.”

There’s no real data to show that Friday the 13th is noticeably more dangerous than other days. But, even if you’re not superstitious it’s hard to ignore today’s preconceived bad luck and if you’re like me, you will second guess things you have planned to do. For example, I was planning on cutting my hair today but, supposedly, if you cut your hair on a Friday the 13th, someone in your family will die. While this may or may not be true, do I really want to test it? No. I just hope my family members can return the favor.